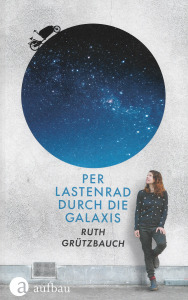 The new book by Ruth Grützbauch takes us into the mobile pop-up planetarium and on a journey to the galaxies of our cosmos. With a lot of feeling and sympathy, she describes her personal “astronomical path” as well as the fascinating world of the galaxies of our universe.

CORONA conditionally, I sat in front of my computer in Vienna in the summer of 2020 to attend the online meeting of the International Planetarium Society (IPS). One of the meetings was on the topic of mobile planetariums, and here I was struck right at the beginning by the presentation of the Austrian astronomer Ruth Grützbauch, who enthusiastically reported on her experiences and activities in a mobile planetarium in the USA. Her presentation and enthusiasm for teaching astronomy inspired me to invite her a little later to a meeting of our Austrian Planetarium Society (GÖP) in Judenburg. Ruth accepted my invitation and we finally met in Styria in autumn 2020. We liked the concept of the mobile planetarium so much that we initiated a collaboration within the framework of the ESERO teacher training. Ruth also knew our ESERO manager Bettina Anderl from her studies of astronomy in Vienna and so the cooperation was fixed. In summer 2021, the time had come and we started the first ESERO training together with the Pop-Up Planetarium. We set off from Vienna to the stars and through the galaxy, even if the cargo bike wasn’t there this time. After 90 minutes in space, or rather in the planetarium, our participants were thrilled, but also quite exhausted. After all, a visit to the pop-up planetarium is tiring and requires patience while sitting on the floor.

Just as Ruth Grützbauch’s stories and descriptions in the planetarium arouse enthusiasm in her visitors, this book also conveys her love of astronomy and, in particular, of communicating the science of the stars to the public. She skillfully and excitingly combines her own professional training and life with the story of the exploration of the cosmos, always from the perspective of the world of galaxies.

We start at the Jodrell Bank Discovery Centre south of Machester in the UK and immediately learn more about our own cosmic home, the Milky Way. Ruth then takes us on a journey to Chile and Hawaii. Chile is home to the largest and most important professional astronomical observatories on Earth. As early as the late 1960s, the European Southern Observatory built its first observatory near La Serena on La Silla mountain. We learn more about our Milky Way, galactic spiral arms, what type of galaxy we are and what monster is hiding in the centre of our own galaxy. Afterwards, we set off with Ruth to Big Island on Hawaii. There our path leads us to the summit of astronomical research on “Mauna O Wākea, the astonishing mountain that stands in the calm”. We experience what it feels like to observe at over 4000 metres above sea level on the UK Infrared Telescope, look into the childhood of galaxies, see the invisible and dark corners of the universe. Once again we head South to Chile, this time our journey takes us further north to the Cerro Paranal observatory in the heart of the Atacama Desert. This is where the ESO’s Very Large Telescope (VLT), four 8.2m reflecting telescopes of the latest design, has been located for a good 20 years. Astronomers like to call Cerro Paranal the “Olympus of modern astronomy”. Great scientific results are due to these telescopes, the ESO staff and astronomers. The Nobel Prizes in Physics in 2019 and 2020 are closely linked to years of observation campaigns by the prize winners at the observatory. But the astronomers’ hotel, the Residencia, also made a name for itself in 2008 when James Bond and his adversary Dominic Greene met here in the final. So there is also a “quantum of solace” for us that despite the inferno at the end of the film, the Residencia is still standing undamaged in the desert under the telescopes.

Shortly we return to Vienna and to the defensio of Ruth’s doctoral thesis. All’s well that ends well – congratulations! But now let’s get out of here and back to the big bang. Astronomers not only observe from observatories on Earth, but also from space. The Hubble Space Telescope of NASA and ESA is particularly well known here. Things were not always good for this “flying observatory” and we learn about the difficult times at the beginning of the mission and the importance ESA had and still has in the project. At the end, we go back to the beginning and into the large lecture hall of the old physics institute in Vienna. Great minds of science have left their mark on the atmosphere here. A few principles and reflections on cosmology, the science of the universe as a whole, once again strain all our attention. But now the time is up and the group trudges out into the bright reality of the day. Shortly afterwards, the universe collapses, or was it just Ruth’s pop-up planetarium?

“Per Lastenrad durch die Galaxis” is a very personal book about professional experiences of its author, combined with a generally understandable narrative about our knowledge of the universe islands and their interactions in the cosmos, the galaxies. For me it was a pleasure to read familiar things from a new perspective, but also to learn many new and unknown things. I wish Ruth and her book much success and continued enjoyment in communicating astronomy to the public, especially with the mobile pop-up planetarium.