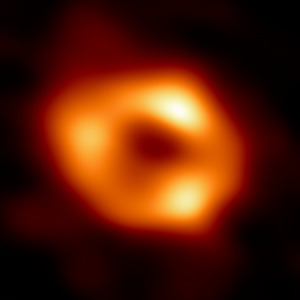 First image of supermassive black hole in our galaxy revealed

On 12 May 2022, the first image of the supermassive black hole at the centre of our Milky Way was presented at numerous international press conferences, including at the headquarters of the European Southern Observatory (ESO) in Germany.

The image was created by a global research team, the Event Horizon Telescope (EHT) Collaboration, using observations from a worldwide network of radio telescopes. The image is a long-awaited glimpse of the massive object located at the centre of our galaxy. Scientists and researchers had previously seen stars orbiting around an invisible, compact and very massive object at the centre of the Milky Way. This strongly suggested that this object – known as Sagittarius A* (Sgr A*) – was a black hole. The presented image provides the first direct visual evidence.